Get A Fixed Fee Quote Today Request a Free Quote

A New Standard Emerges
The terms SSAE 16 and SAS 70 have been used quite extensively in the auditing world as of late, and for good reason.  Statement on Auditing Standards No. 70, known simply as SAS 70 to many, is nearing the end of its lifespan after approximately 19 years of service.  Since its inception in April of 1992, the US auditing standard gradually grew to become the global de facto framework used for reporting on controls at service organizations. From Canada to the Far East and Argentina to Australia, SAS 70 and its local derivative, became a well-known, widely used, and universally accepted audit mechanism that provided assurance to a large and ever-growing pool of user entities.

But as all things come to pass, Statement on Standards for Attestation Engagements (SSAE ) No. 16, known as SSAE 16, has been put forth by the Auditing Standards Board (ASB) of the American Institute of Certified Public Accountants (AICPA). Its purpose was to replace an aging SAS 70 standard that needed to be refreshed, but more importantly, one that would keep pace with the growing push towards more globally accepted international accounting standards. Thus, SSAE 16 was born in 2010, an “attest” standard that closely mirrors its international “assurance” equivalent, ISAE 3402, which was issued by the International Auditing and Assurance Standards Board (IAASB), a standard-setting board of the International Federation of Accountants (IFAC).

A look at SSAE 16 vs. SAS 70 can be seen as a natural modifying evolution of the dated standard and a transition of power from one governing accounting principle authority to another.  The old guard is being replaced, and with that comes new ideas, requirements, and a fresh approach to compliance reporting on controls at service organizations and the responsibilities of the service organization being audited.

So, what are the differences between SSAE 16 and SAS 70? Let’s address the more notable points, as these constitute the “must know” issues for developing an initial understanding of the new standard.  Sure, there are numerous technical differences, but they may have a marginal impact, if any, on the application of the standard, the underlying SSAE 16 engagement, so these issues may be left to the auditors, such as us.

As an initial point of nomenclature, SSAE 16, unlike SAS 70, is an “attest” standard, falling under the attestation framework, and not that of the “auditing” framework, which is the origination of the SAS 70 standard. According to the AICPA, when examining ones’ controls at a service organization, this should not be considered an audit, rather, it should fall under the “attest” standards, hence the name Statement on Standards for Attestation Engagements (SSAE) no. 16. The term “audit” is expected to be reserved in accounting standards for use in relation to financial statement auditing standards.

Another significant item regarding SSAE 16 vs. SAS 70 is that the SSAE 16 standard requires a written “assertion” by management, something that was never required for the SAS 70 auditing standard. This written assertion, which is also commonly known as “management’s assertion,” the “service organization assertion,” or similar term as applied in a given context, is essentially an assertion made by the service organization that must be provided to the service auditor (i.e., the CPA firm that is conducting the SSAE 16 engagement) representing and asserting to a number of essential clauses, such as the following:

•    The description fairly presents the service organization's "system.”
•    That the control objectives were suitably designed (SSAE 16 Type 1) and operating effectively (SSAE 16 Type 2) during the dates and/or periods, as asserted to.
•    The criteria used for making these assertions, (which are additional statements with supporting matter regarding risk factors relating to control objectives and underlying controls) were in place (Type 1) and were consistently applied (Type 2).

A Final Word on SAS 70 and SSAE 16 "Certification"

You've probably heard phrases such as "SAS 70 Certified", "SAS 70 Certification" or similar language from any number of people or organizations.  The simple truth is that there was, and is, no such thing as a "certification" for SAS 70, and the same holds true for the new SSAE 16 standard.  SAS 70 became more prominent with the passage of the 2002 Sarbanes-Oxley Act, resulting in scores of service organization having to become compliant with the SAS 70 reporting standard.  This rush to fill the needs of these very service organizations quickly resulted in all types of incorrect phraseology being used to validate one's SAS 70 reporting.  Practically speaking, a service organization becomes "compliant" with the auditing standard (SAS 70) or the new attest standard (SSAE 16) for which practitioners (i.e., auditors conducting the engagement) are using for reporting on controls.  This "certification" phrase seemed to really irk the American Institute of Certified Public Accountants (AICPA) over the years, so much so that they actually addressed this very issue and other concerns in a four (4) page FAQ titled: "FAQs-New Service Organization Standards and Implementation Guidance".

Request a FREE Consultation
from our Industry leading experts!

Our team will guide you through your Audit planning process. 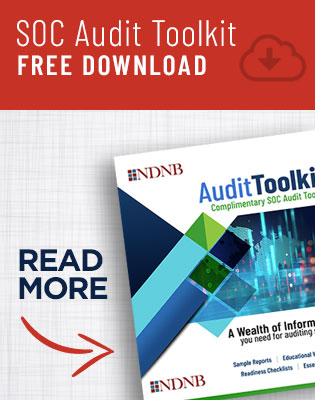 Since 2006, NDNB has been setting the standard for security & compliance regulations

Contact us for a FREE 15 Minute SOC Audit Phone Consultation